Now that is one hot video that I was looking for! Who would not call so sexy blondes to fix your shower, especially if these blondes were Jessie Lee and Kleio Valentien. Before I forget I would like to tell you, I had a really good laugh when I saw them walked into the shower with the chainsaw. Haha, good one girls! I really liked it! Someone in the comments said “count the amount of times they say fuck, shit or oh my god.” He was right. They are talking these words for all the time!
However. Girls came to fix that shower just to proof that they can do it better, even if they are blonde. Of course you will like the idea that they will get wet, if shower starts to works. They took off all clothes and than came in the shower one lucky guy. You can imagine why I said lucky… They sucked his cock and than he fucked both of them. They had sex in many different positions and at the end he squirted on their pretty faces. It is really awesome three-some with hot inked girls! I just can not decide which girl looks better to me. Jessie Lee or Kleio Valentien?

Jessie Lee was born on September 19, 1984 in Buffalo, New York, USA. She entered the adult film industry in summer of 2007. On November 5, 2010 she had a bad car accident, with sustained major injuries, including a fractured neck. She was on the way to the Exxxotica Expo. The driver who was unharmed, set up a website, asking for donations to finances Lee’s medical expenses. Jessie Lee has beautiful boobs and plenty of tattoos.

Kleio Valentiens was born on January 15, 1986 in Austin, Texas. Her enhanced sexy boobs are size 32E (70E). As well as Jessie Lee, she also has a lot of sexy tattoos. 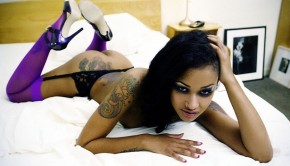 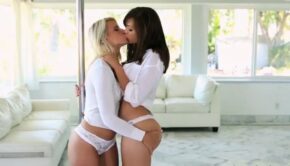 Group Sex With So Much Oil Never Looked Better →

Ricki White And Luscious Lopez Likes To Share A Cock →